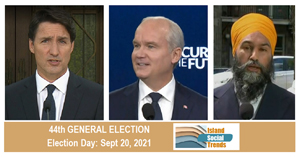 Canada’s 44th federal general election has been called for September 20, with a 36-day campaign underway.

The Liberals want to take credit to overall management of the pandemic. That’s what they’re hedging their bets on for achieving a majority of seats in the House of Commons on election day.

The Conservatives felt heading toward this election that they would this time around be able to achieve a majority. Last time they won the popular vote, but not enough seats to form a majority.

The NDP can verifiably take credit for nudging almost every COVID support to a level where it would really accomplish what it was intended to do (e.g. CERB from $1,000 to $2,000 per month, the CEWS wage subsidy from 10% to 75%, and continuing CERB in a new form as CRB for people who still could not find work or fully resurrect their self employment as 2021 has worn on).

The leaders on Day One:

This morning, Liberal Leader Justin Trudeau opened his remarks at a podium outside Rideau Hall with an update on how Canada is handling the crisis in Afghanistan. He then identified a global pandemic and a global recession. He appealed to all Canadians to get vaccinated against COVID-19.

“in this pivotal moment, who wouldn’t want to have a say,” said Trudeau in hoping to cull out every possible vote from the Canadian population.

He wants to keep Canadians “safe and thriving”. He set a new timeline of 17 years (of change for Canada), to match the 17 months of the pandemic experienced so far. He wants to “hear from Canadians on how to end the pandemic”.

Conservative Leader Erin O’Toole today took an unsurprisingly approach to his speech, focusing on appealing to people’s desire for personal control (but with a tone that society comes second).

He stood strong for business, including small business. He took at swipe at both Trudeau for family connections (“Canada is a country where politicians can earn trust not be born into it”) and dissed the NDP off the ballot map (“There are five parties but just two choices.”).

“Vote for a strong economy, Canada’s recovery plan, for the future, vote Conservative,” said O’Toole in a well-crafted wrap-up.

NDP Leader Jagmeet Singh addressed the media from a busy street in Montreal (not sure if the Sutton Realty ‘Sold’ sign was intentional in the background or not).

Singh did talk about the importance of affordable housing (whether rent or own), how some lower-income seniors losing their Guaranteed Income Supplement for having taken CERB during the pandemic, and how there should be more transparency about vaccines. He called this a “selfish summer election” as called by Trudeau hoping to gun for a majority: “I wouldn’t be calling an election,” said Singh, but now that an election is here: “I believe that better is possible.”

Handling of the pandemic is where the election campaigning have been expected to start. But there are other issues ready to burst forth as the lead battleground for each party seeking voter-shift from people who are not fully aligned with any one party, and new votes among young adults and first-time voters.

Bloc Quebecois Leader Yves-François Blanchet seems to be lining up his fortunes with that of the Liberals in Quebec. The Conservatives and NDP each held one seat until dissolution. He is well-spoken and articulate, but his party is solely defined by the interests of one province.

Green Party Leader Annamie Paul says she will be campaigning only in her own riding in downtown Toronto. This comes as a result of the fallout of party cohesion over the past several weeks.

It’s yet to be seen how much the issue of climate change will play a true role in the outcome of this election. Other strong points in campaigns that could tip votes and seats are Indigenous issues and also the welfare of both youth and seniors. Overriding everything are the aspects of a society and economy in transition, moving fast-forward into a digital age driven by artificial intelligence (EI).

And of course health-care is something that could easily crumble (personnel are overworked, worn out, and leaving in droves), and so all three parties will need to address that, even though health-care management is a provincial responsibility.

Voting in this election could be by mail-in ballot for as many as five million Canadians, due to the pandemic and wanting to avoid being out in a crowded situation during advance voting and on election day. As mail-in ballots are counted by hand, it could take a long while (as much as three weeks, as was the case in BC in the 2020 snap election) to know the final outcome of the September 20 election.

Island Social Trends will be covering the 44th general election all along the way. Overall themes will be presented through a lens of how things are for individuals, families, society and economy on south Vancouver Island.

Check for news posts here at www.islandsocialtrends.ca and on Twitter @IslandSocTrends . Your paid subscription to the Island Social Trends ENews will ensure our insights getting straight to your Email Inbox: subscribe here.