Today it’s been a very windy rainy day, for hours! At one point there was a pelting few minutes of hail. Big gusts of wind, big noise.

As will happen on Vancouver Island, there were moments of sunshine, but the storm has been off and on from morning to evening.

As of 7 pm there were 22 power outages on South Vancouver Island (mostly due to trees down across wires), leaving 9,754 BC Hydro customers without power including in Colwood, Langford, Saanich, North Saanich, Duncan, Highlands, Sooke, East Sooke, Metchosin, west of Sooke (including Shirley), and several Gulf Islands.

The cause of one outage on Pender Island was listed as ‘motor vehicle accident’, leaving 296 customers without power.

For tonight (with winds still blowing hard out there), the forecast is Mainly cloudy with 40 percent chance of showers. Wind southwest 40 km/h gusting to 60 except west 70 gusting to 90 near Juan de Fuca Strait. Low 6.

The forecast is that things will clear by morning. But probably many power outages will take longer than that, given the sheer volume of outages for crews to attend to.

By 2 am the next morning April 5, there were about 5,000 customers still without power in the South Vancouver Island Region. Most of those were on the Gulf Islands and west beyond Sooke.

At 10 am on Tuesday morning, BC Hydro showed 3,134 customers without power.

Of those, 242 are in the downtown Langford core area including where there is major building construction going on; that outage happened at 8:51 am and crews were still on site at 9:53 am; power was restored by 12:23 pm. The cause of that localized outage was weather-related, says BC Hydro rep Karla Louwers. BC Hydro does do load testing for major construction sites. A Fortis gas installation in that area is set for tomorrow April 6 (see Island Social Trends Traffic advisories). 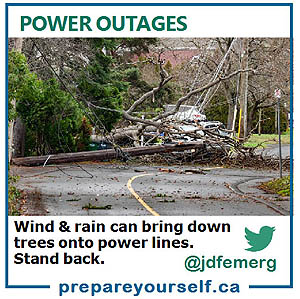