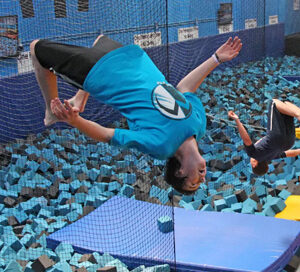 Working toward safer trampoline use in BC was dealt with in the BC Legislature this month.

The regulation will be introduced through a phased transition to mitigate compliance costs for industry and allow time to adapt to new requirements.

These changes were part of The Miscellaneous Statutes Amendment Act (No. 2), 2021, as was introduced in the legislative assembly on Thursday, Oct. 7, 2021.

Trampolining is enjoyed by people of all ages. Participants bounce on a trampoline and sometimes perform stunts, such as twists and somersaults.

Trampolining gained popularity after the sport being a part of the Summer Olympics since 2000, with trampolines becoming common in backyards and the opening of indoor trampoline parks.

According to Active & Safe Central, common injuries include fractures, sprains, and other soft tissue injuries to the ankle, elbow, head, and spine.

In October 2019 a coroner’s report into the death of the Richmond, man who was fatally injured at a trampoline park found the incident to be an accident.

Jason Greenwood died after doing a front-flip into a foam pit at an Extreme Air Park. He had asked his family to take a video of the somersault, the report said, but didn’t resurface after the jump.

Greenwood, a stepfather to three children, later died in hospital. His death sparked a lawsuit against the park and official recommendations that trampoline parks be regulated in B.C. for the first time, due to the potential public safety risk.

The report released October 22, 2019 found that Greenwood landed head-first after bouncing off a trampoline into the foam pit during a visit to the park with two children. When Greenwood didn’t reappear, his family and bystanders began to dig through the metre-deep pit looking for him.