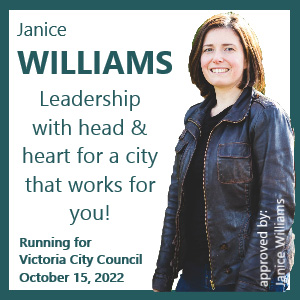 When a new sort of candidate comes along, it catches the attention of news media and the public.

Many people get into politics as a career choice or for business-related or party-related gain, others are driven by something else. Most people assume the former motivation of most candidates and are naturally curious about the other.

That ‘something else’ is a drive to make change for well-considered reasons in the interest of the public good.

One of those ‘something else’ candidates is Janice Williams. She’s running for a seat on City of Victoria Council. Her campaign website is at willvotewilliams.ca and she’s on Twitter @VoteYYJWilliams .

Invested in the community:

Island Social Trends had a chat with Janice Williams earlier this month, as she was beginning to ramp up her campaign toward the October 15, 2022 election. This article is not only about the candidate and her views, but to highlight how politics can be done differently.

“I’m totally invested in this community,” said Janice Williams at the start of the interview. “So when issues come up, I’ve engaged over the years,” she says as a matter of fact about her involvement that produced her community profile.

That includes speaking up about Clover Point when a wastewater treatment plant was proposed for that location and leading a group on that. There were other issues like the use of Dallas Road for overnight parking — responding to someone in her neighbourhood saying ‘this is really a problem and it’s frustrating’ (re garbage and noise). “And I find myself agreeing, yeah, that isn’t quite right,” she says as a way of explaining how she gets involved and takes issues on.

When it came to Beacon Hill Park it was about “listening to my other neighbours and their experiences” and their comments about 24/7 sheltering. She says that parks and public spaces need to be accessible and usable by everyone, and that “many people felt like they weren’t being heard and that not enough was being done to manage the issue in a way that mitigated the impacts”.

She speaks up for bigger issues out of “a love for this city” and the “residents who call this place home and the businesses that operate here”, says Williams.

Why run for city council?

Why take it on? “Here’s something that’s really bad and you can stand by and you can tolerate it, or you can stick up for an issue,” says Williams.

“I don’t expect anyone else to do what I would be willing to do myself,” she says. “And I feel strongly about leading by example. Sometimes you have to be the person who raises their hand, otherwise you get steamrolled,” says the first-time municipal candidate.

Motivated by helping others:

One of the issues that got her started was access to Cesarean birthing for women. The mother of two helped found the Cesarean by Choice Awareness Network. It’s now a private Facebook group with over 2,000 members providing support to women who would like to choose Cesarean. “Having that experience of helping others is something that motivates me,” says candidate Williams.

Williams appreciates feeling confident that she’s made an improvement for someone else, as she puts it. “I’d like to be able to do the same with my work on Council.”

Originally from Alberta, shifted to Victoria:

Williams is an economist and business owner. She says her sense of resilience has been informed by watching her parents.

She grew up in Camrose, Alberta — a town of about 14,000 people at that time. Her parents divorced when Janice was “quite young”. She watched her parents — who co-parented — remake their lives with new careers. Her father shifted from being a farmer to getting a diploma in computer systems engineering and commuting to work at a mine, and her mother (having had three children by age 22) shifted from being a waitress to becoming a social worker.

Janice moved to Victoria at the end of 1996 to attend UVic, arriving on the day of the big December 29, 1996 snowstorm that shut the city down. For her first four years in Victoria she rode a bike everywhere because she couldn’t afford a car.

Ramping up the campaign:

People are telling Janice Williams they’re glad she running. She says she appreciates that level of support. Like many candidates in 2022, she is relying a lot on social media to get word out about her campaign. She receives emails from people in the community, and corresponds that way too.

Williams says she is refraining from “any connection with special interest groups”, expounding that “our community is such a broad place”. She says the role of a councillor is “not what they personally want, but what best serves the community as a whole”.

“I’m wanting to hear everyone,” she says, as she develops her campaign platform. She prefers to be “thoughtful and cautious”. Three things are in the platform so far:

“Bike lanes are an improvement to our city,” says Williams. But she is concerned about how the implementation of bike lanes has been divisive in the city. She feels the bike lane infrastructure in the City of Victoria “has been done with the motivation of reducing car use rather than we want to make things safer for bikes”.

She prefers carrot over stick. “We shouldn’t punish people for their choices, as they choices have underlying reasons. Maybe we need to do a better job of understanding those reasons. It might be easy for a person who has a 9 to 5 government job to switch from car to bike. But it be really hard for the parent of three who has three drop-offs and has to do groceries, and is perhaps a shift-worker. That lifestyle (of using a bicycle) is not necessarily compatible.”

A lot of that is common sense and seeing the broad picture, which shouldn’t be in fact a breath of fresh air in politics, but it seems to be.

Williams says she has developed a bit of a “thick skin” from dealing with the politics of all this. Primed, as you might say, to take on a municipal election campaign in politics as it is in 2022.

Mary P Brooke has been covering socio-political news in the south Vancouver Island region since 2008. She first launched MapleLine Magazine (2008-2010) which morphed into the weekly newspaper Sooke Voice News (2011-2013), which further evolved into the weekly colour print and PDF West Shore Voice News (2014-2020). Island Social Trends emerged from all of that, mid-2020 as a fully online news portal at islandsocialtrends.ca .