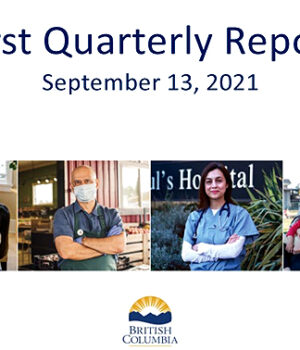 An update from the BC Minister of Finance was rolled out today. The First Quarterly Report within 2021-2022 indicates an ‘uneven economic recovery’, which should comes as no surprise during the ongoing COVID pandemic.

“Prudence is still required,” said Finance Minister Selina Robinson. That’s the BC approach even while employment is higher than it was pre-pandemic (BC unemployment rate was 6.2% in August, down from over 13% following the onset of the pandemic, and lower than the 7.1% national average), and that revenues from both retail (13% higher than pre-pandemic) and resource industries were higher than anticipated.

There is interplay between provincial budgets and federal influences. Due to a federal contribution to employment initiatives, for example, the BC budget saw $30 million to its benefit for that aspect of COVID support funding.

Minister Robinson indicated today that BC’s child care program which presently includes a boost from an agreement with the federal government would remain unaffected if, for some reason, that federal-provincial agreement with BC were the change following the 44th general election.

Direct assistance to individuals and business:

The pandemic brought immediate assistance from the BC Government to individuals and small businesses.

There won’t be any more BC Recovery Benefit payments to individuals; that was a one-time thing issued to all eligible British Columbians starting December 2020 (through May 2021) based on income and need.

The spending for the program was $1.3 billion in last year’s budget (2020-2021) and was topped up by $100 million in 2021-2021 to cover trailing applications (though just $90 million was spent in this fiscal year), for a total spend of $1.4 billion. As of February 28, 2021 nearly 1.7 million applications had been approved, benefiting over 2.3 million British Columbians, and today’s update indicates that 2.7 million British Columbians were supported by that particular benefit (as at June 30, 2021).

People spent the money on essentials like food and clothing, at local businesses in communities. It’s clear that people really needed the support and in the process local businesses were supported and a sense of stability achieved during an uncertain time.

Small businesses saw a fluid response from the provincial government in terms of support programs that continued and expanded as needed (originally budgeted at $195 million and ballooning to $470 million). That includes the BC Business Recovery Grant that increased its level in the ledger based on continued incoming applications (as noted by Minister Ravi Kahlon in an interview with Island Social Trends last week) and helping out the tourism and restaurant sectors in particular with the Circuit Breaker Business Relief Grant.

Any unspent allocations in the BC recovery budget are made available to address other emerging priorities that support people and businesses, to address the impacts of the continuing pandemic.

Minister Robinson did not seem phased today at the projected deficits now being seen as far beyond what has actually occurred. The BC finance process seems to be keen to err on the side of caution in terms of being resilient during the ongoing pandemic (now in a fourth wave driven primarily by the Delta variant of the SARS-CoV-2 virus).

Due mainly to timing changes of projects in the transportation and post-secondary sectors, taxpayer-supported capital spending on hospitals, education facilities, transportation infrastructure, housing and other projects is forecast to total $8.2 billion in 2021-22, which is $0.3 billion lower than the Budget 2021 forecast.

Spending pressures noted in today’s Finance ministry release included “responding to emergencies such as wildfires and floods”. The “main risks” in the government’s fiscal plan are listed as:

BC went into the pandemic with a strong financial position and seems to have taken seriously all aspects of provision and responsiveness to the economy.

Meanwhile, the BC Government — which benefits by property tax revenues — seems to have no particular plan of attack on housing prices as the market has spiraled upward among those who can afford to take advantage of market opportunities during the pandemic.

The Finance ministry release today makes these statements, knowing full well that their policy is to make housing ‘affordable’ for British Columbians:

The next fiscal update comes later in Fall 2021.