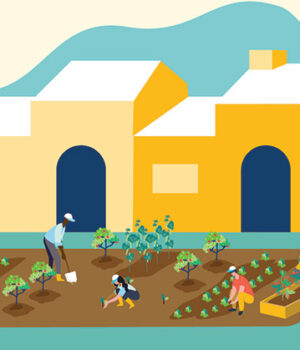 Today the British Columbia ministers for public safety, forests, and climate change appeared with the finance minister to further outline some details about how the province plans to deal with the impacts of climate change.

That includes “helping people recover” from last year’s disasters — they focused on floods and wildfires, even though the death toll from the heat dome was the most significant impact on individuals last year.

The announcement also included details on how to “better protect communities against future climate disasters”.

All of that to the tune of $2.1 billion, and in followup to the Budget 2022 presentation by Finance Minister Selina Robinson on two days earlier.

The Public Safety Minister and Solicitor General is Mike Farnworth, who also served as deputy premier during Premier John Horgan’s time away from the top job to undergo cancer treatments in December and most of January.

Katrine Conroy is the Minister of Forests, Lands, and Natural Resource Operations and Rural Development. Even with a new Ministry carved out from within the broad-scope ministry (cover land management issues), she still has a lot on her plate to reorient and move forward arguably one of the most impact and core sectors of the BC economy.

Minister of Environment and Climate Change Strategy George Heyman has been steadfast and focused on the mission of his portfolio since the beginning of the Horgan NDP government in mid 2017. He attended COP26 in Glasgow last fall, providing BC leadership in discussions there, and where “CleanBC was recognized as the most creative government climate program”, Heyman reminded today.

Minister of Finance Selina Robinson comes from a care-sector background. Her speeches are never dressed with the nuance of economic strategy, though she does a good job of explaining the impacts of a functioning economy on individuals and families (her focus during delivery of the Budget on February 22 in the BC Legislature and in addressing the Greater Victoria Chamber of Commerce the following day).

From this new funding, the province says that $1.5 billion over the next three years will help support the government’s ongoing response and recovery efforts. “This includes $1.1 billion in contingencies to support those people, businesses and communities that have been hit hard with costs due to recent disasters,” it was stated in a news release today.

“Budget 2022 makes a significant one-time increase for costs under the Emergency Program Act, from $36 million to $436 million to support flood recovery costs. Funding will support ongoing disaster response and recovery activities, such as debris removal and cleanup, and dike repairs. Funding will also support programs such as Disaster Financial Assistance, which provides local governments, people, businesses and charitable organizations with assistance to recover.”

The previously announced $5 billion in federal funding will also help the Province offset the costs of the response and recovery efforts from the floods and other recent natural disasters in B.C.

A total of $145 million over three years will strengthen BC’s emergency management and wildfire services, including “transforming the BC Wildfire Service into a year-round firefighting and risk mitigation workforce”

The government says this will “allow both the BC Wildfire Service and Emergency Management BC to add capacity and equipment to deliver proactive services that focus on the prevention, preparedness, response and recovery of wildfires and other emergencies”.

A year-round wildfire service allows these public safety professionals to complete more fire mitigation work before and after the summer months, and support communities in their FireSmart initiatives. It should be noted that the previous (BC Liberal) government used the wildfire budget line item as a flexible financial tool; by deliberately setting it below what would actually be needed, then topping up as required during wildfire season, that allowed for funds to be used in other areas. The former government’s approach at the very least did not acknowledge the reasonably anticipated recurrence of summer forest fires, let alone recognize the role of climate change in lending fuel to those fires.

Over the coming three years, the BC Budget shows an additional $98 million to fund wildfire prevention work and help maintain road access to aid in future wildfire response.

Budget 2022 also provides $90 million in community grants to complete FireSmart initiatives and fuel management activities that will make homes and communities safer from wildfire risk. The FireSmart program will be strengthened to help more communities participate in the program.

The Community Emergency Preparedness Fund will receive $110 million to support communities and First Nations with emergency preparedness and mitigation. This has been a popular program with First Nations and local governments with funding for more than 960 community projects since its introduction in 2017. Funding streams include evacuation route planning, structural flood mitigation, volunteer fire department equipment and training, Indigenous cultural safety training, flood risk assessments and emergency operations centre training and supports.

In addition to the above funding, available to both local governments and First Nations, an additional $10 million in funding is allocated to support the particular emergency preparedness and mitigation needs of First Nations communities, which are often disproportionately impacted by disasters in British Columbia.

Budget 2022 invests $83 million in the Climate Preparedness and Adaptation Strategy to help the province better prepare for the impacts of climate change. The strategy will invest in actions to improve knowledge of future climate impacts that will help increase the effectiveness of government investments.

“It’s not enough to react,” said Heyman today, saying that planning starts with good data which will inform the right actions. We need to expand our ability to plan for the future. “We need to be able to predict, prepare and invest.”

“There will be an extreme heat response framework,” Heyman revealed today.

Heyman says BC is a leader on the North American continent in the transition to adapting to the demands of climate change. To ensure the transition there is a need to support people and jobs and emission-exposed industries. Rewarding industries that are reducing emission and making investments to reduce their emissions is part of a stable transition. Many British Columbians rely on gas while the economy and infrastructure shifts to electrification, he reminded.

To make sure that people and communities continue to receive timely and accurate information in the face of changing weather, the Province is also expanding the River Forecast Centre and floodplain mapping program. Floodplain mapping will help communities identify key dikes and priority investments.

Funding for the strategy will also continue the work generated through the Healthy Watersheds Initiative with a $30-million investment. B.C.’s streams, rivers, lakes and wetlands store carbon, absorb flooding and storm surges, supply drinking water, and provide critical habitat for fish and other species. Last year, the Province invested $27 million to support more than 60 projects at over 200 sites across B.C. as part of nature-based solutions to climate change impacts, many in partnership with First Nations and local communities.

Climate events have reinforced the need to build a stronger B.C. by investing in the province’s economic, environmental, and social strength to make life better for people now and in the years ahead.

“People across the province know the impacts of the climate crisis – it is here now and we need to respond with great urgency. Budget 2022 does just that with unprecedented investments to help us recover from climate-fuelled disasters and to prepare for the future extreme weather events with stronger, more resilient communities and infrastructure,” said George Heyman, Minister of Environment and Climate Change Strategy.

“We have all seen the impact that climate change is having on people’s lives and in our communities. That’s why while we continue the fight against climate change, we are also investing to strengthen our defences so we can protect people, communities and businesses from future climate-related disasters,” said Finance Minister Selina Robinson.

“Recent climate-related disasters, such as floods, heat waves and wildfires, have been the most challenging on record for people in British Columbia and have demonstrated the need to significantly change how we do things. We are making it possible for people and communities to recovery and become more resilient in the future,” said Mike Farnworth, Minister of Public Safety and Solicitor General.

“I have seen first-hand the devastating impacts of wildfires on communities across B.C. and had the privilege of meeting many of the dedicated staff who work on the front lines, season after season. The significant investments we are making to create a year-round BC Wildfire Service and shift from a reactive to proactive approach will help people and communities better prepare for and recover from wildfires in the future,” said Katrine Conroy, Minister of Forests, Lands, Natural Resource Operations and Rural Development.

New flavour of Stronger BC released ahead of budget & agri-tech announcements (February 17, 2022)

Impacts of climate change underline work to build a cleaner BC (December 30, 2021)