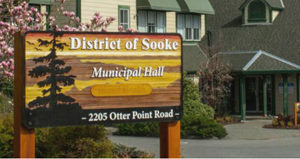 Two senior staff at the District of Sooke are reportedly absent on administrative leave. Pending further confirmation, it has been learned by West Shore Voice News that (Acting) Chief Administrative Officer Brent Blackhall and Rob Howat, Director Development Services and Approving Officer, were directed off the job by Sooke Mayor Maja Tait in the last day or so.

More details to come on that. [UPDATE – 6 am Dec 15, 2018: Mayor Maja Tait has said: “I can confirm that they (Blackhall and Howat) are away from the office until January 19th, the reasons for such are confidential. Staff and Council are working together to ensure service levels are maintained and we wish everyone a safe and happy holiday season.”]

Meanwhile, a District of Sooke Special In-Camera meeting has been called for 6 pm on Monday, December 17 to discuss labour relations, followed by a Special Open Meeting to consider amendments to Policy 7.3 Christmas Season Personnel Policy, at 7 pm. That will be followed by Committee of the Whole.

In some past years, Council has had some concerns about too many staff being away on vacation time around the holiday season, in such a way that the normal required function of municipal business has been impeded.

As of the October 20, 2018 election, District of Sooke Council sees Mayor Maja Tait in her second term of office as Mayor (third term on council). Of the 2018-2020 six councillors, two are previous members of council (Brenda Parkinson and Ebony Logins) and four are Sooke residents who are new to elected office (Jeff Bateman, Al Beddows, Megan McMath, and Tony St Pierre).

In the past week at public events, Bateman seemed comfortable in his new role, Beddows offered up that he “has no regrets”, McMath said she is really enjoying the new role, and St-Pierre said he is a bit astonished at having to read 400 to 500 pages of material before a council meeting.