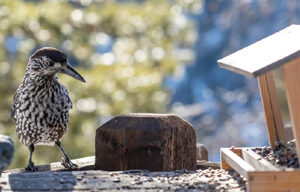 The BC SPCA is asking the public to temporarily remove backyard bird feeders and to empty bird baths due to a highly pathogenic avian influence (HPAI) spreading across Canada.

Avian influenza — also known as ‘bird flu’, is a virus that can affect many bird species. That includes poultry on farms, but also wild and pet birds.

The H5N1 strain is considered highly pathogenic. It will cause severe illness and death in birds. Waterfowl and eagles are at high risk.

H5N1 can survive for months:

The virus is shed by infected birds through feces and respiratory secretions. H5N1 is highly resilient, being able to survive in the environment for several months and continue to infect other birds.

Bird feeders can be sites for disease spread by encouraging unnatural congregations of birds and attracting other wildlife, says the BC SPCa.

“Fallen seed is also an especially dangerous source of disease,” says Dr Andrea Wallace, manager of wild animal welfare, BC SPCA. She explains that when birds feed from the ground they are also exposed to droppings that accumulate below a feeder.

The presence of bird feeders and baths can also increase the risk of transmitting the virus between nearby animals such as backyard chickens or turkeys, says Dr Wallace in a BC SPCA news release today.

Spread of H5N1 to humans:

“We need to do everything we can to stop H5N1 in its tracks,” says Dr Wallace, noting that “on rare occasions this virus can also cause disease in humans who have been in close contact with infected birds or heavily contaminated areas”.

“Bird flu is caused by a type of influenza virus that rarely infects humans,” says the Mayo Clinic about avian influenza on their website.

“More than a dozen types of bird flu have been identified, including the two strains that have most recently infected humans — H5N1 and H7N9. When bird flu does strike humans, it can be deadly,” states the Mayo Clinic.

“Health officials worry that a global outbreak could occur if a bird flu virus mutates into a form that transmits more easily from person to person. Researchers are working on vaccines to help protect people from bird flu,” it is stated by the Mayo Clinic.