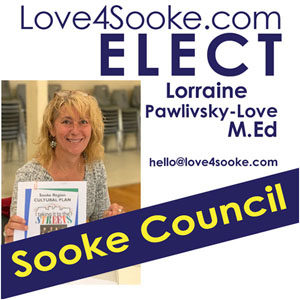 With just two days until the District of Sooke by-election to fill one council seat, candidate Lorraine Pawlivsky-Love is excited for the opportunity to be part of Sooke Council.

She has been campaigning around the community for several weeks, connecting with voters across a wide spread of Sooke. A long-time advocate of the arts, she had some good fun at the Sooke Arts Council AGM on September 17.

Pawlivsky-Love moved to Victoria in 1994 with her two children from Pincher Creek, Alberta to work for Newsgroup Victoria developing revenue-driven publication products using her journalism, business and graphic design skills.

She says she made a choice to be a more active parent, returning to post-secondary vocational education in professional photography which evolved into a BFA and M.Ed (Arts Education/Curriculum) from UVic.

“My main career has been in the arts for over 40 years. Although I’ve done many other jobs including operating a small ranch, a home-based art gallery, worked in my Mom’s restaurant and textile businesses as well as my parents’ rental revenue property and renovations, whew…I bring a very diverse and intrinsic background to my candicacy!,” said Pawlivsky-Love this week.

She says she moved to Sooke ‘on a trial basis’ in June 2017 immediately discovering a community that embraces arts and culture including being accepted for appointment to the District of Sooke’s Program for the Arts committee chaired by Brenda Parkinson.

The eager candidate says she “sees a need to step up and work to ‘give back’ now that my adult children are thriving in Victoria”.

Pawlivsky-Love says it would be an honour of being able to serve community and neighbours in continuing the legacy that Councillor Parkinson left for developing the arts and culture in Sooke and the CRD.

“Whether you vote for me or one of the other talented and proficient candidates I hope you know what an honour its been to have this choice.” she said on the eve of the general election.

General voting for the by-election is on Saturday September 28 at Edward Milne Community School at 6218 Sooke Road, open 8 am to 8 pm.

Advance voting produced 370 ballots cast (combined total from two voting opportunities — September 18 and 25 — held at Sooke municipal hall). Of about 10,300 eligible voters, that was an advance turnout of about 3.6%.

The by-election vacancy resulted upon the passing of the late Brenda Parkinson who had been re-elected to Sooke council in October 2018 but who died in June 2019.