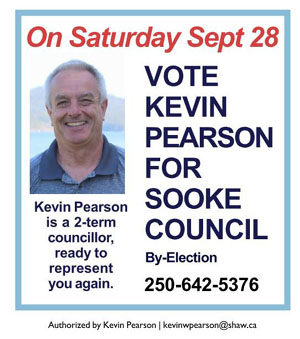 With just two days until the District of Sooke by-election to fill one council seat, candidate Kevin Pearson is confident of his chances.

“My thoughts are that it is always important to vote,” says Pearson. He’s already served two terms on council (2011-2014 and 2014-2018) and hopes the Sooke community will give him a third chance.

Pearson ran for the mayor’s seat in October 2018 but lost to Maja Tait who is now serving her second term as mayor.

“Sooke has an amazing history and I will endeavour to help create an amazing future,” said Pearson today as he continued talking with people around Sooke.

Two weeks ago Pearson took part in a meet-and-greet for by-election candidates as organized by Transition Sooke. It was held at Sooke Community Hall where he chatted with local residents about his time on council in previous years and his goals for working with the current council of 2018-2022.

Some voters have said they miss him on council, and would like to see him back. His decision-making on council was usually well-informed and well-considered. He remembers the arts community coming forward in December 2015 to appeal to Council to maintain funding for the Sooke Fine Arts Society, a council decision that saw him balance the discussion and help council reach a conclusion that satisfied the community.

Pearson is close to retirement from his full-time executive career at Canada Post where he manages hundreds of employees.

General voting for the by-election is on Saturday September 28 at Edward Milne Community School at 6218 Sooke Road, open 8 am to 8 pm.

Advance voting produced 370 ballots cast (combined total from two voting opportunities — September 18 and 25 — held at Sooke municipal hall). Of about 10,300 eligible voters, that was an advance turnout of about 3.6%.

The by-election vacancy resulted upon the passing of the late Brenda Parkinson who had been re-elected to Sooke council in October 2018 but who died in June 2019.