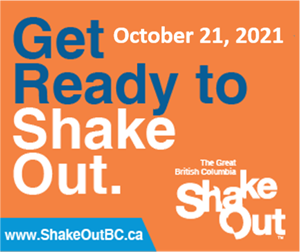 Tomorrow is the big day, to practice for the big one!

Seismologists have been advising the Vancouver Island region for years about a significant earthquake (magnitude 8.0 or higher) that is inevitable, given the movement of tectonic plates under the Strait of Juan de Fuca.

This pending event is called ‘the big one’. Experts say a powerful magnitude 9.0 earthquake could rip through the Pacific Coast, killing thousands and causing tsunami waves up to 20 metres high.

The quake is expected to — at some point — happen along the Cascadia Subduction Zone, a 1,000 kilometre fault line that runs from northern Vancouver Island to Northern California.

The fault is a boundary between two tectonic plates: the Juan de Fuca tectonic plate and the North American plate (that Vancouver Islanders live on). The Juan de Fuca plate is moving toward and will eventually be shoved beneath the North American plate. It’s already become stuck for three centuries now (the last recorded quake of that magnitude in this region was in January 1700), building up stress. When the rocks slip past each other along the fault, it will cause a megathrust earthquake.

Time to ramp up on preparedness:

Given the known danger that looms ahead, BC’s level of engaging the public has been modest at best. The annual ShakeOutBC event coincides with a global earthquake drill, but even just a few years ago (in 2017 at a UBCM convention) when Island Social Trends asked the minister responsible for emergency preparedness (Jennifer Rice) as to the government’s awareness of how prepared individuals are in their homes, families and businesses, the answer was that there’s essentially little intel on that.

Organizers of the ShakeOutBC event have been shortchanged for years as to resources and marketing reach about getting people involved in practicing their earthquake response skills. This year there seems to be more of a budget for a few ads, but with reliance on a website that seems to prioritize registration while also providing lots of documentation and infographics on how to be prepared.

But overall, the soft approach to preparedness for this pending crisis truly shortchanges people. Municipalities might have committees and programs, but until BC turns up the volume on the importance of this level of preparation the results are sporadic at best.

The style of most government in this day and age – all at levels across Canada — is to soft-pedal the realities of how bad things can get. We saw an example of that with the failed response of the BC Government to the well-forecasted heat dome in June this year, during which at least 570 people are known to have died directly due to the unmitigated heat in their homes (mostly in urban areas, mostly people with low incomes and/or low mobility and limited social or community connections).

Be prepared, not scared:

We’re polite in Canada, and wouldn’t want to offend anyone with scary messages. But how scary will it be when the big one comes and people find themselves in various states of disaster. There won’t be mass-scale rescue missions; first responders are rightfully going to attend to their own situations first. Roads and bridges could be unusable to varying degrees. Utilities might be inoperable. There could be fires and floods to deal with. The Internet could be down. Banking might be unavailable. The food supply chain will be interrupted.

It can take a while for the importance of these messages to sink in, as people are busy in their lives, community resources are often limited, and people do find the topic a bit unsettling.

A practice opportunity on October 21:

Muscle-memory that you build by practicing Drop, Cover and Hold On is everyone’s first line of defense.

The ShakeoutBC event is an opportunity to do just that, at 10:21 am on October 21, Give it a try!

There’s not just the action of tucking yourself underneath a table, but also taking time to develop emergency response plans for home, school, car, workplace, and what you would do if you’re out in your community for shopping or other activities.

There’s a lot of info on the ShakeOut BC website (where as of October 20 there are 728,772 registrants as participants in tomorrow’s event — everyone at their own locations). Individuals, groups, businesses, schools, everyone! Earthquake drills are for everyone!

On the Capital Regional District’s (CRD) PrepareYourself.ca site there is a wide range of preparedness info. The CRD also has a PrepareYourtself.ca YouTube Channel, but which so far has only 69 subscribers.

The BC government has an emergency preparedness page for seniors and people with disabilities. Emergency Management BC has a wide range of information on their website including various preparedness guide documents, including their Earthquake & Tsunami Guide (PDF).