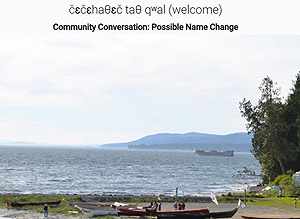 It’s one thing to change the name of a street or a building in order to update to the social mores of this decade.

But to change the name of an entire town is a big deal.

Yet Powell River is looking at doing just that.

Why change the name:

According to Civic Info BC, the consideration of a name change has to do with “concerns about the name “Powell” stem from Israel Powell’s time as Superintendent of Indian Affairs for British Columbia from 1872 to 1899, where he pursued policies meant to assimilate Indigenous Peoples into Canadian society’.

According to the City of Powell River in a statement yesterday, that apparently included the implementation of residential schools, banning of the potlatch, and removing ceremonial objects from communities. Powell also helped ensure that the sale of Lot 450, which included the tiskʷat village site, went through. The impacts of these policies, such as loss of land, language, culture, and family ties for Tla’amin people, are still felt today.

The first engagement activities are the launch of a new section within the Powell River website which includes a survey.

Printed copies of the survey are available at the library, recreation complex, and City Hall.

The survey is open from March 1 to March 25. This spring there will be a variety of public activities to continue sharing information about the history and identity of this place, and to be in conversation.

Residents of Powell River are also encouraged to write to the Mayor and Council with their viewpoint, including name and address, to info@powellriver.ca or by letter to City Hall.

The City of Powell River is located on the northern Sunshine Coast on the BC mainland.

The city says the area offers an amazing mixture of nature, culture and industry, and a range of affordable housing options.