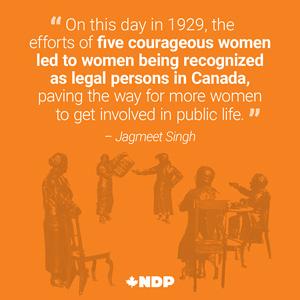 It’s strange today to think of women not being acknowledged as persons, but it was only 91 years ago on October 18, 1929, women were acknowledged as “Persons” in Canada, almost a decade after most had been granted the right to vote.

This status gave women the opportunity for greater participation in public life, including appointments to the Senate and senior judicial levels.

“Today we honour the leadership of the Famous Five who fought for this status, winning that battle in 1929,” says local MP Alistair MacGregor (Langford-Juan de Fuca).

“We also acknowledge the ongoing fight for greater workplace equity for women, something my NDP colleagues and I will continue to champion,” he said today online.

BC Premier John Horgan said today in a statement that “representation matters”, adding: “We need to make sure all people — especially people who continue to face discrimination and barriers — are represented in our political institutions. He said that the BC NDP has over 50 percent women running to serve their communities in the Legislature.

Horgan noted the increased in gender-based violence that has been seen during the COVID-19 pandemic in 2020.