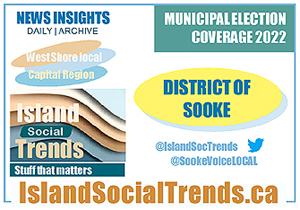 The 2022 municipal election in the District of Sooke is set to be an interesting one, with issues both outside and inside the council itself set to have an influence on the upcoming campaigns.

It is unclear still which current council members will be running for re-election in the October 15 municipal election, but issues such as member absenteeism and the balance between council responsibilities and the members’ respective day-jobs could play a role in which names appear on Sooke Council ballots this year.

Only one current council member — Councillor Jeff Bateman (first elected in 2018) — has announced he will be running again, for a second term. He states his priorities as growth management and the restrictions on Sooke’s capacity given the “increasingly congested two-lane highway”. He describes himself “as a fan” of the Official Community Plan “with its focus on community development, climate action and smart-growth density in the town centre”.

Tait and Logins, both on Sooke council for multiple 4-year terms. The last election general municipal election was in 2018, and the last by-election was in 2019. The upcoming election in Sooke will be held on October 15, 2022, with the campaign period beginning on September 17, 2022. We can expect announcements as to who is running for the election throughout the summer months leading up to the nomination period on August 30, 2022.

Tait was elected to the District of Sooke Council in 2008, serving as a Councillor until 2014 when she was elected Mayor. She was re-elected for the position in 2018. Tait was born in Bragg Creek, Alberta and moved to Sooke in 2006 into the Sunriver neighbourhood. Since her 2008 election, Tait has served on many panels and boards, notably as Union of BC Municipalities president, and as Board and Committee Member of the Federation of Canadian Municipalities.

Tait retired from her career in property management in 2019 to dedicate her energy to working with the Sooke Council and to supporting her family. The demanding nature of working for council can be difficult to balance with a separate career which often provides a main source of income for council members. It is an especially tricky challenge for Councillors with young families; Tait has one young school-age son.

First-time Councillors elected in 2018 include Megan McMath, Al Beddows, Jeff Bateman, and Tony St-Pierre, having learned the ropes under Mayor Tait in the past four years. Councillor Dana Lajeunesse was elected to council in a 2019 by-election after the untimely passing of Councillor Brenda Parkinson in June 2019.

Councillor Megan McMath has had several appointments since her win in the last election. She is a director on the Capital Region Emergency Service Telecommunications board, as well as being a member of the Juan de Fuca Water Distribution Commission. As an EMCS graduate and having lived in Sooke since the age of four, the challenges facing the area are familiar to McMath.

There has been some controversy recently with regards to inconsistency in attendance to Sooke Council meetings, which occur twice a month in the evenings. Information on the meetings can be found on the District of Sooke website. There has been less than perfect attendance for current council members, with McMath recently requesting permission to miss a fourth consecutive council meeting; after missing three meetings a Councillor can be asked to step down.

McMath cited prior work commitments with her day-job as an emergency services dispatcher as partly to blame for her absenteeism. It highlights the challenge of balancing the responsibilities of council with a career. Most municipal council members have day-jobs in addition to their elected roles with the municipality, for which the pay on its own does not provide a livable income. For a first-time Councillor, this balance can be all the more difficult to manage.

Ebony Logins and Tony St-Pierre have demanding careers outside of their duties as Councillors. Logins is an Executive Director in the non-profit sector in addition to her council appointments to the CRD Regional Housing Trust Fund Commission, the Vancouver Island Regional Libraries Board, and the Te’mexw Treaty Advisory Committee. She is also a business woman, running a sports and wedding photography service. St-Pierre, meanwhile, has used the expertise he has gained through his education in Planning, Adult Education, and Community Development in his projects with Sooke Council, all the while running a small farming business.

Councillors Al Beddows and Jeff Bateman have slightly differing demands on their time. Bateman is a freelance writer and has contributed to the founding of the Sooke Farmland Trust. Bateman also served as president of the EMCS Society for two terms. Beddows has retired from his job as Manager of Electronic Communications at the Department of Defense in Esquimalt and now devotes his time to his family, in addition to his duties as Councillor. Beddows chairs the SEAPARC Commission.

The next few weeks and months will bring more clarity on what names will appear on ballots for the District of Sooke municipal election this fall. Until then, many will be watching closely for clues towards the intentions of the Councillors and Mayor for setting themselves up for another four years of public service.