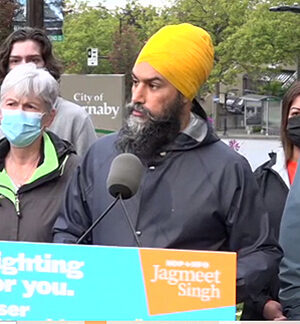 For NDP Leader Jagmeet Singh at 8:30 am this morning in Burnaby, it was the last press conference of the 44th federal election campaign, with reporters on the ground and by Zoom.

The energy was upbeat under a clear morning sky as he answered several media questions ahead of a long day in the province during which he will get around to Vancouver, two spots in Surrey, Maple Ridge, and the Tri-Cities (Port Moody Coquitlam/ Coquitlam-Port Coquitlam) this morning and this afternoon. This evening he wraps up at 7pm in Burnaby North-Seymour at Confederation Park.

Singh says he’s confident about doing well in the election tomorrow, September 20. That means keeping NDP seats and ideally gaining more. To achieve that, where has the hard work been? That was the question to the leader from Island Social Trends today.

“I feel like in Ontario it’s a bit harder, folks are really used to the kind of cynical arguments of the Liberals,” said Singh. “But I want folks to know… don’t buy into the cynical arguments.”

Much of the NDP leader’s campaign has been about making comparisons to the Liberal leadership over the past six years with Justin Trudeau as Prime Minister.

“Mr Trudeau’s been all for show and it hasn’t helped you. Just talking about things doesn’t actually make things better. You need someone who’s actually going to fight to deliver on those things. And that’s New Democrats.”

Singh reemphasizes: “We are committed to fighting to deliver on the things that people need. So I want to encourage people to know that.”

What makes an NDP candidate tick:

So if people are still deciding how to vote tomorrow, we asked Singh what’s the mojo of an NDP candidate that is different from other candidates? To help people make their final choice.

“The big difference – when you get a New Democrat, you get someone who cares about you. Someone who’s going to fight for you, who will never back down from a tough fight,” Jagmeet Singh said, happy to answer the question.

“Lots of times, the Liberals always kind of look for excuses. That seems to be their go-to. Every time I asked to expand the paid sick leave program, Mr Trudeau mocked the question — ‘Oh it’s not my jurisdiction, it’s not my job’. Then in the middle of the campaign says he’s going to do something about it,” Singh outlined.

“That’s what you get with Liberals. They’re looking for excuses to not have to do something, for excuses that it’s not their job. Mr Trudeau has often said it’s not his job. He said that recently when people were suffering in Alberta,” Singh said this morning.

Leadership in our view is making sure we fight for people no matter what , and find ways to fight for people. And that’s what you’re going to get when you elect a New Democrat.

Pretty much all opinion polls indicate that there will be a minority government (again) after the September 20 election results are known. Results, it should be noted, could take several days to be finalized, given the higher volume of special ballots cast through voting-by-mail and people voting at electoral district offices instead of at advance polls or on general election day.

Once back in Ottawa, back in the House of Commons, it’s quite likely Jagmeet Singh and his band of NDP MPs will hold the balance of power. He may have to work with either a Liberal minority or a Conservative minority. A difference dance for each of those scenarios.

Working with a minority government:

Either way, what’s the number one thing he will look for in a throne speech or a budget?

“We’ve been saying this along along. Who should pay the price of this pandemic? It shouldn’t be you or your family, the working class or middle class. It should be the billionaires,” says Singh.

“Our number one priority is making sure billionaires pay their fair share so we can invest in all the solutions we need to make sure that people’s live are better. We’re going to keep on fighting for you. Just know that.”

Mary P Brooke, Editor, Island Social Trends, has been covering election campaigns up close in the west shore and on South Vancouver Island since starting her series of local news publications in 2008.

Having lived in Ontario, Saskatchewan and BC, and having travelled to all provinces in Canada, she brings a national perspective to her local and regional news coverage during federal election campaigns.