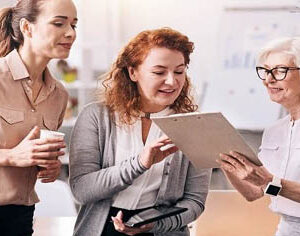 Mature workers getting back into the workforce after retirement or raising a family — or never having left the workforce in their late 50s or early 60s — is not a new trend. But it’s increasingly the case as economic realities set in for seniors across the country.

People age 65 to 74 years already do not receive the extra Old Age Security (OAS) top-up that people age 75+ receive from the federal government. This is primarily based on the presumption that people age 65+ are in many cases still working — out of financial necessity or because they choose to (regardless of necessity).

As with many things in the mainstream economy, it can take time for processes and standards to catch up.

Employers part of the new reality:

When it comes to older workers, it is as much up to the employers as the potential employees to be part of the success of this new reality.

People who remain longer in the workplace or return at an older age are part of some new employment trends.

Much of it is driven by economic necessity, but smart businesses will also benefit by offering a right-fit for ‘mature workers’.

Federal and provincial governments might look at offer tax credits to older workers, as a partial incentive to retaining older workers in the active workplace. That would also help businesses retain employees as the overall population ages.

Last year BC Finance Minister Selina Robinson was presented with the idea of an older worker tax credit, during a day-long economic think tank with economists from across Canada.

Older workers are now being recognized for the maturity they offer the workplace; that might translate as reliability, punctuality, or understanding why certain tasks must be done. If they have already have worked in a particular industry or specific business, older workers carry ‘corporate knowledge’ that can be useful in more challenging times of a business or project.

In addition to loyalty and stability, older workers usually offer a desirable range of decision-making skills, management skills, leadership skills, and communication skills. They usually have confidence, can exercise empathy, and take a collaborative approach. They may bring the benefit of established networks, and provide opportunities for being a mentor.

Whereas in recent years some legal experts have encouraged older workers to fight to have employer decisions of declining a job application examined if it was perceived that age was the factor in being rejected for a job.

Now the lens is turning in two key areas. Is the older worker prepared to take on a particular job to the same level of performance as any other worker, or more importantly, is the employer offering a position that can offer success for both the employee and the employer or overall workplace?

Encouraging employers to design particular job offerings that would be best suited to older workers is as much as part of older worker hiring success as well as just smart business organization.

Employment for older workers may not just be in an office setting. It could involve working from home on contract, or providing services in the community.

Creative roles for seniors may allow them to also continue in supportive or caregiver roles to their families.

Workshop in the west shore:

Understanding more of the dynamics of the modern workforce for older workers is the topic of a workshop coming up in the west shore this week.

On Thursday October 27 the WorkBC Centre westshore office will be holding a one-hour session at their office at 3179 Jacklin Road in Colwood. Specifically, they are focussing on mature workers who are looking to re-enter the workforce. Registration for the free Mature Workers Workshop can be done online.

Mary P Brooke has been a self-employed west shore journalist, editor and publisher since 2008. Her business started the series of publications that has become Island Social Trends back in 2008 with MapleLine Magazine (2008-2010), then producing a weekly print newspaper Sooke Voice News (2011-2013), which she then expanded to be the colour weekly print/PDF newspaper West Shore Voice News.

Island Social Trends emerged in mid-2020 when it was clear that active news is sought by most readers online.

Mary Brooke was recently an SD62 school trustee candidate in the west shore, engaging with residents and voters in the Langford, Colwood, Metchosin and Highlands voting area. Through Island Social Trends she continues to cover news of the west shore including business and the economy.