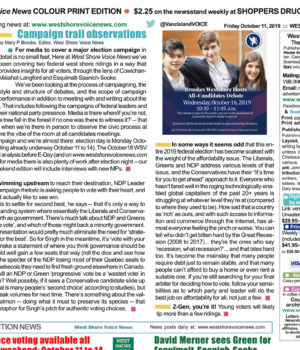 For media to cover a major election campaign in detail is no small feat. Here at West Shore Voice News we’ve been covering two federal west shore ridings in a way that provides insights for all voters, through the lens of Cowichan-Malahat-Langford and Esquimalt-Saanich-Sooke.

We’ve been looking at the process of campaigning, the style and structure of debates, and the scope of campaign performance in addition to meeting with and writing about the candidates themselves. That includes following the campaigns of federal leaders and watching them shape their national party presence.

Media is there when/if you’re not, we tell the story. ‘Did the tree fall in the forest if no one was there to witness it?’ — that phrase comes to mind when we’re there in person to observe the civic process at voting stations or capture the vibe of the room at all candidates meetings.

It’s a 40-day campaign and we’re almost there: election day is Monday October 21 (with advance voting already underway October 11 to 14). The October 18 WSV weekender will offer final analysis before E-Day (and on www.westshorevoicenews.com up to October 21). And for media there is also plenty of work after election night — our October 25 ‘results’ weekend edition will include interviews with new MPs.

========== Like salmon swimming upstream to reach their destination, NDP Leader Jagmeet Singh in his campaign rhetoric is asking people to vote with their heart, and for the party they would actually like to see win.

Strategic voting is to settle for second best, he says — that it’s only a way to work around the long-standing system where essentially the Liberals and Conservatives switch back and forth as government. There’s much talk about NDP and Greens ‘splitting the progressive vote’, and which of those might back a minority government.

Proportional representation would pretty much eliminate the need for ‘strategic voting then hoping for the best’. So for Singh in the meantime, it’s ‘vote with your heart’ and in so doing make a statement of where you think governance should be heading. The NDP could well gain a few seats that way (roll the dice and see how they tumble), but with the specter of the NDP losing most of their Quebec seats to the re-emerged Bloc Quebecois they need to find fresh ground elsewhere in Canada.

If you lean left, will an NDP or Green ‘progressive’ vote be a ‘wasted vote’ in this 2019 election cycle? Well possibly, if it sees a Conservative candidate slide up the middle (voting Liberal is many people’s ‘second choice’ according to studies), but the popular vote will speak volumes for next time. There’s something about the valiance of a struggling salmon — doing what it must to preserve its species — that resonates as a valid metaphor for Singh’s pitch for authentic voting choices.


========== In some ways it seems odd that this entire 2019 federal election has become soaked with the weight of the affordability issue. The Liberals, Greens and NDP address various levels of that issue, and the Conservatives have their “It’s time for you to get ahead” approach to it. Everyone who hasn’t fared well in the raging technologically-enabled global capitalism of the past 20+ years is struggling at whatever level they’re at (compared to where they used to be).

How sad that a country as ‘rich’ as ours, and with such access to information and commerce through the Internet, has almost everyone feeling the pinch or worse. You can tell who didn’t get bitten hard by the Great Recession (2008 to 2017)… they’re the ones who say ‘recession, what recession?’… and that bites hard too. It’s become the mainstay that many people require debt just to remain stable, and that many people can’t afford to buy a home or even rent a suitable one.

If you’re still searching for your final arbiter for deciding how to vote, follow your sensibilities as to which party and leader will do the best job on affordability for all, not just a few.

Hashtag for the 43rd Canadian General Election is #elxn43

This editorial was first published on page 2 in the October 11 to 13, 2019 weekend digest edition of West Shore Voice News.