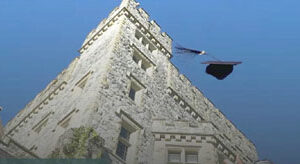 The ceremonies will be held at the Dogwood Auditorium on campus; that building was completed and officially opened during the pandemic.

Among other notable award recipients, that will include paying tribute to two honorary degree recipients: water protector, youth activist and voice of a generation Autumn Peltier and visionary leader, philanthropist and children’s musician Raffi Cavoukian.

Update June 10: At the second of three RRU convocation ceremonies today, Royal Roads President Philip Steenkamp said to grads after they crossed the stage: “Take your courage and share it with others, give people around you reason for hope and the courage to make a difference themselves.”

Steenkamp said it has taken courage for the students to further their education and to get to this point of convocation. These students are mid-career and have come back to transform their directions.

RRU President Steenkamp told Island Social Trends by phone on Friday how struck he was by the importance of witnessing ceremony, how the event is a rite of passage. He said there was no apprehension about being back in a large group setting. “They’re just so glad to be back,” he said.

Today at the live (and livestreamed) convocation, Steenkamp said that having these sorts of graduation events in person is meaningful and significant, that it’s invaluable to gather in person to support and witness this transitional moments for the graduates.

Graduates of course received applause, and at the end of the formal ceremony the graduates were also asked to applaud those who have helped them achieve this milestone — including family and friends.

Steenkamp told Island Social Trends by phone on Friday that he spoke with many parents and grads at the event. He was impacted by how proud the parents were, and how they remarked how difficult the past few years have been. They were proud that their son or daughter persevered.

A pitch for sustainability of caring:

“Advancing sustainability through caring is a goal we should all embrace,” said President Steenkamp.

At one of today’s ceremonies, Steenkamp presented an Honorary Doctor of Laws degree to Raffi Cavoukian, for “this lifetime commitment to nurture the hearts and minds of children”.

The musician has dedicated to shaping the lives of Canadians over five generations through his music and philanthropy. Known widely by his first name, Raffi has committed his career to making the world a kinder, more peaceful place. He strengthens a global movement that views honouring children as the best way to create sustainable, peacemaking cultures.

Among the graduates receiving awards are Master of Arts in Justice Studies graduate Barbara Horsefall, who receives the Governor General’s Gold Medal. Ten graduates will receive the Chancellor’s Award.

Catching up for two missed years:

Royal Roads graduates from 2020 and 2021 (graduates who had their virtual convocation between June 2020 and November 2021) also get their chance to cross the stage in person, with New Alumni celebrations taking place June 13 and 14, 2022 at the Dogwood Auditorium on the Royal Roads campus.

Ramping up and catching up with post-secondary graduation (June 6, 2022)