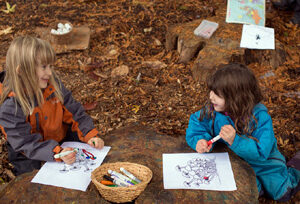 On or before January 20, families who this week are registering their age-5 children into Nature Kindergarten or French Immersion Kindergarten for September 2023 will find out if they’ve won the lottery.

That’s how seats are chosen for children starting into Kindergarten in those two specialty streams in the Sooke School District 62 (SD62). That’s due to a consistently higher demand for seats in those programs than there are seats.

SD62 delivers public education for families in the west shore region, with now 29 schools in Langford, Colwood and Sooke.

Nature Kindergarten (aka Nature K) is offered at two elementary schools: Sangster Elementary in Colwood and Saseenos Elementary in Sooke. There are 20 seats at each school for the Nature K program.

Registration opened online at 8 am yesterday morning, January 9 and will run to 3 pm on Friday January 13. | Nature K Registration for Sept 2023

Prior to the opening of registration, parents were required to attend one of the 1-hour Nature K info sessions (one held at each of Sangster and Saseenos, whether the child would be registered in one or the other).

A lottery (drawing of names) will determine which children get into the program for the 2023-2024 school year.

For Nature K, two spaces are reserved for students with Indigenous backgrounds at each Nature K program location.

A total of 144 French Immersion Kindergarten seats are offered in SD62, across three schools: John Stubbs (in Colwood), Millstream Elementary (in Langford), and at Ecole Poirier (in Sooke). Seat distribution:

Parents/guardians will find out on or before Friday January 20 if their child has received a seat, says SD62 administration.

If they are unsuccessful in the lottery they will be directed to register for Regular Kindergarten.

Online registration for SD62 Regular Kindergarten starts at 8 am on Monday January 23 and runs to 3 pm on Friday January 27.

This year, Kindergarten is for children born in 2018, as Kindergarten generally starts when kids are five years old.

Across BC, there are 853 hours of instruction for each Kindergarten child through the academic year.

Mary Brooke was a SD62 school trustee candidate in the October 2022 election (Belmont Zone — Langford, Colwood, Metchosin, Highlands). She is the mother of four now-adult children who attended schools in SD61, SD62, and SD72.