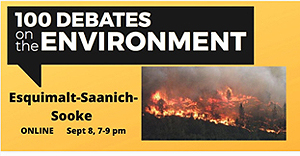 A two-hour online debate about the environment and the challenges in dealing with the climate crisis was engaged in by four candidates in Esquimalt-Saanich-Sooke (ESS) along with organizers and what sounds to have been a large audience.

The Zoom call was organized by 100 Debates on the Environment, one of many such events across the country this evening.

Running for a fourth term to continue on as the Member of Parliament for ESS, Randall Garrison (NDP) led with the ‘planet on fire’ catch-phrase, and it does stick. Urgency is well-embedded in those words. He’s been fighting for the environment since he was a teenager participating in the first Earth Day. He has given talks in high schools about rising sea levels and since 2011 has maintained a fight to protect the Southern Resident Killer Whales (SRKW) from their plight of dwindling.

ESS Liberal candidate Doug Kobayashi said he came to a level of serious concern about the environment about 10 years ago. He feels there needs to be consistent messaging about climate change, that it’s “all over the map” whether it’s water conservation or food waste. He believes in a ‘carrot or stick’ approach rather than confrontation, in order to make progress on climate-related issues.

Harley Gordon is the Green Party candidate for ESS. He feels there needs to be an ‘ecosystems at risk’ approach to protecting endangered species instead of singling out particular species. Tackling the climate crisis “will take a lot of bold action”, he said this evening. He points out that Canada is a large importer and exporter of food, and that Vancouver Island “very food insecure”. He proposes that the federal government needs to change its mandate toward production of local sustainable agriculture products.

Communist Party candidate Tyson Strandlund feels society already has the answers to addressing climate change but needs to take action, underscoring all evening that socialism is the answer. He points out that Canada is making a “rapid descent into a police state” and supports the defunding of police. Canada should get out of free-trade agreements, he said this evening, and raise farm incomes by protecting them with income supports. He notes that Canada’s forests hold one-third of the earth’s carbon, and thus forests must be protected.

The ESS Conservative candidate Laura Frost did not participate in this evening’s debate.

Tonight’s debate was moderated by Jackie Larkin. The format was a bit complex at times, but a lot of points were made by each of the candidates. There was not a lot of time for questions from the public.

A recording of tonight’s event will be available on 100debates.ca

Tomorrow night the same sort of calls will be held in French across the country.

Island Social Trends is covering three south Vancouver Island ridings in this 44th federal election: Cowichan-Malahat-Langford, Esquimalt-Saanich-Sooke, and Victoria, as well as following the campaigns of the national party leaders. Watch for our analysis on election night.